The J.T. Hannah’s Kitchen known today is built from rich traditions of the past. Each food item we serve, the hospitality shown to our guests, and the way we operate our business, is inspired by the man who did it best – J.T. Hannah

Being the largest business east of Knoxville meant J.T. also had the largest labor force. Folks came from far, remote areas and worked long hard hours through the week. As was the custom back then, bunkhouses were put up to house the workers. J.T. soon added a lunchroom just off the old Icehouse building, hired the best cook around, and began serving delicious, home-cooked meals. He was also known to tap a barrel or two of his finest local brews.

J.T. was a prosperous businessman in the Great Smoky Mountains, operating the largest freight warehouse and stockyards in East Tennessee. Arriving daily at the warehouse were barrels of the finest local beers & whiskey, the widest variety of the freshest produce farmed in the Southeast, as well as the best livestock – cattle, hogs, and chickens. J.T. even had an exclusive contract to sort and distribute seafood and the finest Atlantic salmon in the territory.

With word quickly spreading about the hearty fare and bounty of beverages available at a reasonable cost, other folks began to come by the old warehouse looking for food and rest. Demands became so strong for the specialties coming from the kitchen of J.T.’s warehouse that he slowly closed down the storerooms and stockyards and opened his doors full-time to the public around 1930.

The traditions started by J.T. live on as we provide the highest quality meats, pasta, and seafood around. Our vegetable and produce remain the freshest available and the best cooks still oversee the preparation of each dish offered here at the warehouse. C’mon in, sit a spell, and enjoy the hospitality found at J.T. Hannah’s Kitchen, just as they did way back when. 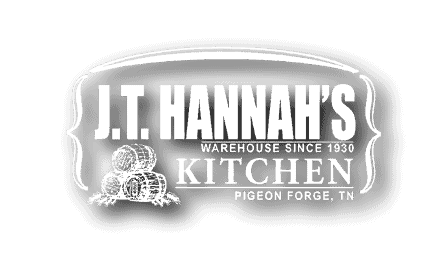